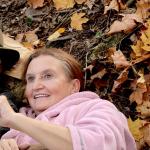 Manětín - the region of table mountains and baroque sculptures has attracted filmmakers for many years. One of the most recent examples is the filming of a new Czech Television mini-series on the life of Božena Němcová, starring Anna Kameníková and Anna Geislerová. It was shot at Rabštejn and Manětín in mid-October this year. A trip to the region around Manětín is for many people still a journey into the unknown. One feels thousands of years away from urban life and the rapid pace of today. The Manětín region is a forgotten, sparsely populated landscape with a strong Sudeten history and there are no larger settlements or industrial enterprises. So why is this remote area so popular with filmmakers?

"The location of the Manětín region predestines it for close cooperation with film crews. In addition to a large number of Baroque monuments, it offers the filmmakers unexplored natural destinations, the theme of Sudetenland whose genius loci is still untapped, and the phenomenon of defunct Sudeten villages which has come back to the filmmakers’ attention," says Radka Šámalová from the Regional Film Office of the Pilsen Region. "The advantage of our region is its very good accessibility not only from the capital but also from neighbouring Germany. The region has a functioning infrastructure and it can offer top services of local providers at more than affordable prices. There are a lot of benefits here," she adds.

Not only Manětín or Rabštejn are exceptional, but also the surrounding landscape. This was largely incorporated into the film trilogy by director Václav Marhoul who shot the film The Journey Home over four seasons here. It follows up the successful films Out Of The City and To The Woods, which were also made here. In The Journey Home movie, Tomáš Vorel returns to the Czech countryside, specifically to the area of Rabštejn, and presents the stories of ordinary, and at the same time a bit extraordinary, people who still live in harmony with nature and won’t leave the countryside for a city, as is customary today. "My stories were inspired by a local forester, a farmer called Weber (Jaroslav, on whose farm a large part of the film takes place) and a local female shaman who actually lives here, in Černá Hať. These are stories of three real families from the area that make up the whole story”, said Tomáš Vorel this August in an interview for the Czech Press Office. According to Vorel, the story could not be filmed without the farmer and the district forest officer. Actor Tomáš Vorel Jr. who also has a role in the film believes that The Journey Home has certainly something to say to the younger generation; it carries the message of a return to nature and to the essence of life on earth. The Journey Home shows the beauty of the local nature and the countryside, it records its entire annual cycle and is a sort of opus on all these topics. The shooting of the film, which will open in Czech cinemas in August next year, was finished in the Manětín region exactly one year ago and its production was co-funded by the Pilsen Region.

If you are looking for a tip for an autumn trip to a film location, then we recommend visiting the area around Manětín and Rabštejn. The forgotten region north of Pilsen is one of the areas in the Czech Republic with the lowest light pollution. If you want to watch the stars, this is the right place to be. It is also worth visiting the “ghost” church in the village of Luková where Spanish producers filmed a documentary programme for the BBC Channel last year, or table mountain Kozelka, which attracts local climbers. You can also stop by in the small (and pretty) village of Nečtiny and have a meal at the renowned Inn Na Radnici.