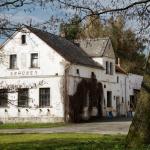 A historical drama from the era of border closures after the Communist takeover will open in cinemas in March next year. The film titled Christopher tells a story of one of the hardest strikes against the Church and depicts the destruction of the monastic community in the 1950s. Director Zdeněk Jiráský was inspired not only by the life in totalitarian Czechoslovakia, but also by the border landscape of the Pilsen Region. This area has recently become famous thanks to the film The Painted Bird, directed by Václav Marhoul.

In the first half of this year, the filming took the crew for example to Olbramov, a village with less than sixty permanent residents. The local pub served as a backdrop for a period festivity. As the director said, very important for the film was the depiction of the spirit of the local landscape and the preserved buildings. Zdeněk Jiráský won acclaim for his work in the past; he won the Czech Lion award for his social drama Flower Buds. Recently, he also worked with historical material in the television film God With Us about the Thirty Years' War.

During the filming, the filmmakers also went to the town of Úterý, which has long been a favourite location for film productions. Films made here include The Wild Country (1997), A Girl And A Magician (2008) and The Habermann's Mill (2010). Most of the above movies depict the Úterý’s picturesque square with townhouses as well as the local Renaissance town hall, the Baroque Church of the Birth of St. John the Baptist and, of course, the unspoiled nature of the Úterý Stream valley. The charming character of the town, its rich history and the proximity of the West Bohemian spas, add to the local charm. Near the town, there is the village of Vidžín with the spacious gardens of the Svoboda family, who are happy to give you a guided tour at any time of the year, or the recently renovated Mansion Rectory. The rectory was declared a cultural monument; it also includes separate period cottages, which used to serve as facility for children's camps and open-air schools. It is possible to book accommodation in both the rectory and the cottages throughout the year; the owners are also building a small riding school there and what is important - they welcome filmmakers!

And something interesting in conclusion – the makers of the Christopher movie have dedicated the film to the Post Bellum organization, which since 2001 has been searching for and recording memories of witnesses of the key moments of the 20th century. “This story should interest the young generation, too. Because all the main characters are young people who decide how to live. Which is actually the destiny of every young person”, said producer Marian Urban. The movie was also filmed in the night streets of Pilsen and in the building of Měšťanská beseda in Kopeckého sady.